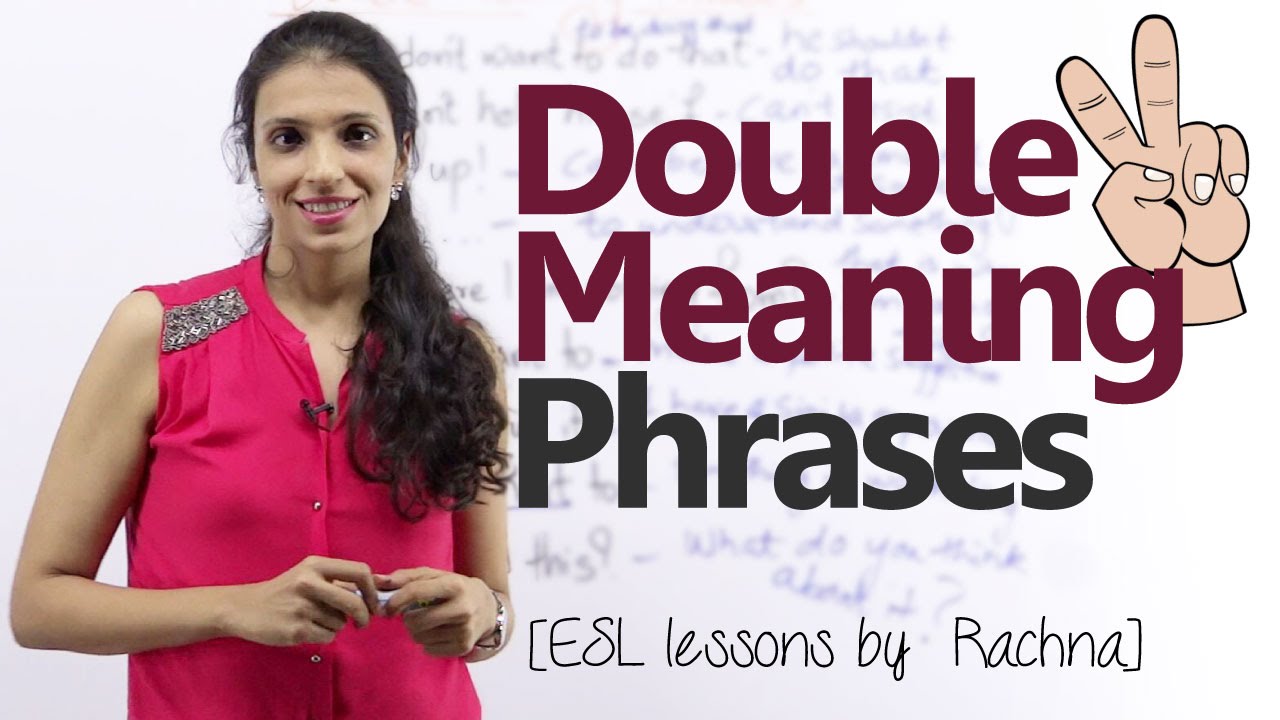 In this English lesson, you will learn some phrases that have a completely different meaning from the words used in them. These are the double meaning English phrases used by people in their daily English conversation.

You don’t want to do that!

If you take this phrase literally, it sounds as if someone is making a statement that you don’t want to do something (in which case it doesn’t make sense). In reality though, this phrase is used when advising someone not to do something, so the real message behind this expression is “You shouldn’t do it!”

He can’t help himself

When someone says about another person that they can’t help themselves, it means the person in question can’t RESIST doing something, they’re too weak to say NO to themselves
Let’s say, you’re eating too much chocolate on a daily basis, and your work colleague asks you one day why you’re eating so much chocolate every day. You can simply respond by saying “I just can’t help myself!” which means that it’s a habit so strong you can’t resist it.

When someone tells you to shut up, it’s quite clear what they want to tell you, isn’t that right? Sometimes, however, the phrase “Shut up!” can be used to express something completely different – namely, your amazement at something the other person is telling you about. So if you’re speaking with an English speaking person and they respond to you by saying “Shut up! I can’t believe it!” It doesn’t necessarily mean they want you to shut your mouth and stop talking to them. It merely means they’re so surprised at what you just said that they’re using the phrase “Shut up!” as means of expressing they disbelief or excitement.

The phrase “I see!” is used conversationally all the time when people want to say that they get it, that they UNDERSTAND it, and this is actually something that a lot of foreign English speakers should learn pretty early in their lives.

You may want to…

This phrase may seem a bit confusing at first. Does it mean you’re giving the other person a permission to do something as in “You may do it”? What this phrase actually means is quite the opposite to giving someone a permission to do something – it’s all about giving the other person a suggestion that they should probably choose to do whatever it is you’re telling them to do! “You may want to…” is a very polite way of letting someone know as to what would be the right course of action while “You should…” might actually sound like a command rather than a suggestion!

Tell me about it!

“Tell me about it!” doesn’t mean “TELL me ABOUT it”.
It means “Yes, I know exactly what you’re talking about – I have the same experience!”
Here’s a situation to describe exactly what I’m talking about here:
You: “My little sister is real nightmare – she constantly makes demands to our mom and cries if she doesn’t get what she wants!”
Your friend: “Tell me about it!”
What your friends is telling you is – “Yeah, I can completely relate to that because I also have a little sister who’s behaving that way!”

It doesn’t hurt to…

When someone tells you that it doesn’t hurt to do something, they don’t literally mean that it’s not going to be painful. What they mean to tell you is that the activity in question is going to result is something really beneficial to you, so it’s definitely worth doing it!

How do you find this…?

I remember someone asked me how I found my job to which I started telling them about the recruitment agency who helped me to land my job with the company…
What that person actually meant was – “What do you THINK ABOUT your job?” – so in this case the English verb “to find” has another meaning on top of the most common one which is to actually find something after you’ve been looking for it!